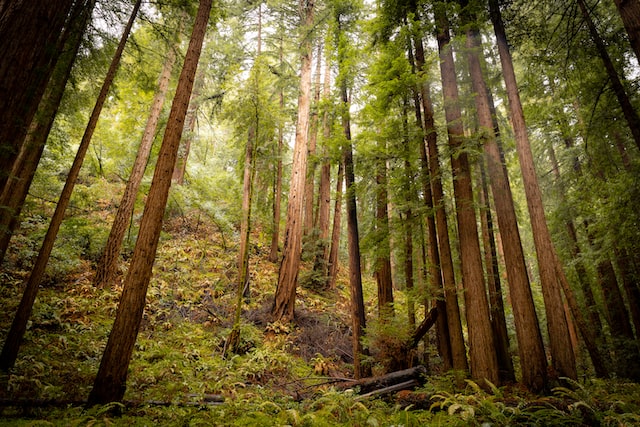 Photo by Wallace Henry on Unsplash

CECS researchers are offering a look into California’s efforts to reduce carbon emissions. In a paper published in Global Change Biology, CECS researchers used remote sensing data to assess whether forest carbon offset sites in California are storing as much additional carbon as they are credited for. Offsets are important for California to meet emission goals because they counterbalance emissions from industries that are difficult to decarbonize.

Research led by Dr. Shane Coffield and Dr. Jim Randerson of UC Irvine, as well as other CECS researchers, offers a critique on California’s carbon offset protocols by assessing whether or not the resulting projects were sequestering additional carbon and benefiting the climate. The paper is meant to provide “constructive criticism of the state’s compliance offset program which could be improved to more rigorously assess additionality”, said Dr. Coffield.

As part of the state’s plan to reduce carbon emissions, the California Air Resources Board (CARB) manages the state carbon offset program, also known as the Compliance Offset Program. In order to comply with carbon emission limits, emitters can purchase emission offset credits by investing in carbon offset projects approved by the state. One of the most common types of offset projects in California consists of landowners managing their land to increase carbon storage. These are called Improved Forest Management (IFM) projects. The additional carbon stored at each site is issued as credits which can then be purchased by emitters. This concept is referred to as “additionality”, the idea that the landowner should only receive credit for the additional carbon storage that is a direct result of their land management strategies and would not otherwise occur.

To evaluate the additionality of IFM sites, CECS researchers used remote sensing data to assess carbon accumulation rates, tree species composition, and tree harvest rates at 37 IFM sites in California. The study focused on the results from offset sites versus control groups of other nearby and similar private forest lands in California over the same time periods.

The researchers found that, overall, IFM sites did not often show evidence of sequestering additional carbon when compared to other forests. They found that carbon accumulation rates reported by the sites were 2.4 times higher than what was observed from remote sensing data. In areas where there was increased carbon accumulation rates, the increased rates could largely be attributed to the fact that the forests were growing back after a period of intense harvesting.

Researchers also found that many sites had high harvest rates before becoming offset sites. Some projects even saw increased harvest rates because under CARB protocol, sites can continue to harvest as long as they continue to store carbon stock above the baseline projection. Because many of these sites are located on particularly productive lands, many sites continued to harvest as usual and were still able to maintain carbon stocks beyond what was defined in the baseline.

Lastly, the study found that many IFM sites owned by timber companies consist disproportionately of tree species that have little to no timber value. This meant that for some sites, the land was at little to no risk of being disturbed had it not been an offset site.

These are three examples of where a lack of additionality was found. In these scenarios, landowners were receiving compensation under the carbon offset program for the forest’s natural recovery, which would have happened regardless of whether the forests were offset sites. This means there was minimal additional climate benefit to the offset sites, which may not actually be offsetting carbon emissions.

These findings highlight the fact that IFM sites aren’t sequestering as much additional carbon as they are credited for. This is particularly significant because IFM sites are given millions of dollars to manage land with the intent to sequester additional carbon. This study indicates that the program’s current form could be underdelivering for California’s climate goals. Instead, researchers encouraged the state to invest more efforts into reducing carbon emissions at the source and improving Compliance Offset Protocols to reward projects that protect and manage existing carbon stocks. Other changes that could be made to increase the climate benefit of carbon offsets are to utilize remote sensing technologies to better monitor carbon sequestration relative to other forests and adjust baselines so that they are a better metric for assessing additionality.

Congrats to @shane_coffield @wangathan @RandersonJim and many other CECS researchers on their new paper on CA forest carbon offsets!🌲

New paper! How can we use remote sensing to build confidence in forest carbon offsets? We developed a framework to systematically assess whether improved forest management (IFM) projects in California are actually leading to additional carbon sequestration https://onlinelibrary.wiley.com/doi/full/10.1111/gcb.16380