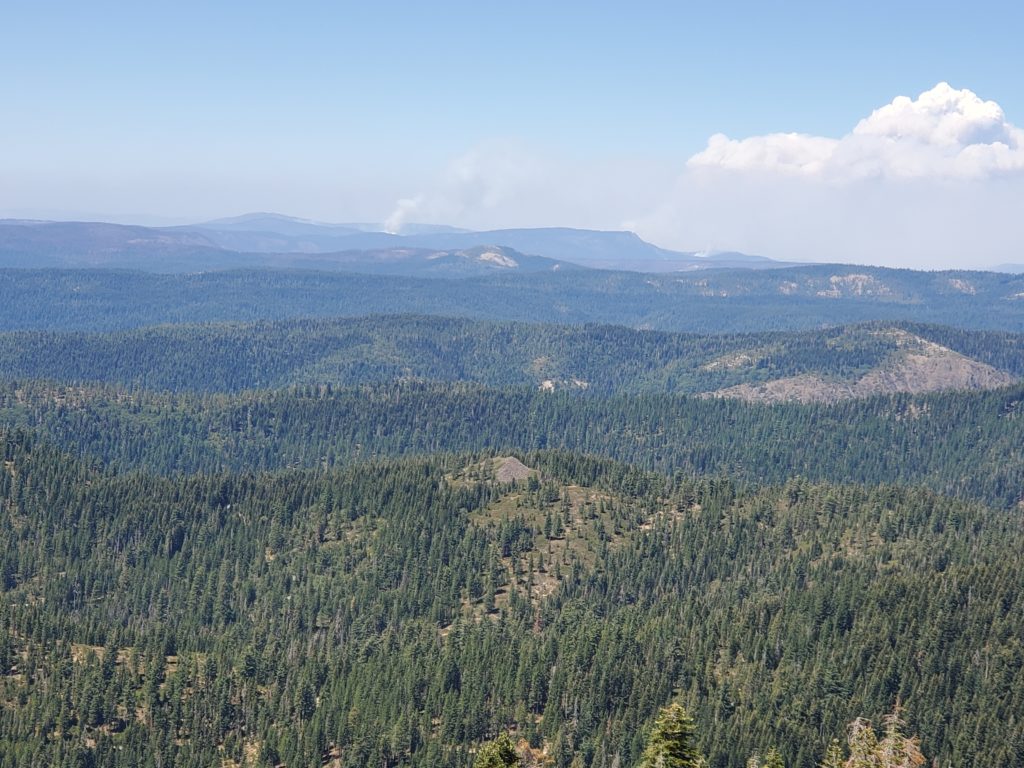 In an effort to quantify the impact climate change is having on California forests, new CECS research using remote sensing data shows that California forests have sustained a net loss of 6.7% of tree cover since 1985. This research may play a major role in expanding our ability to manage lands, allowing forests to continue to provide natural climate solutions, and in developing more in-depth and accurate datasets for vegetation cover.

The study, published in AGU Advances, was led by Dr. Jonathan A. Wang of UC Irvine, and Dr. John J. Battles of UC Berkeley. Using remote sensing and geospatial datasets, the researchers developed annual statewide maps of vegetation cover and disturbance from 1985 to 2021 in order to understand exactly what factors are driving change in California forests over time. Their combined results show that California forest land is more threatened than ever by climate change, due to a combination of harvest, die-off, and especially fires.

In the study, researchers mapped statewide vegetation type (trees, shrub, or grass) and disturbance factors (fires, drought induced die-off, and harvest) to create spatially accurate maps from 1985 to 2021. They used a change detection analysis of different Landsat reflectance images, where any changes at a given location between different times were identified and quantified. This process was then repeated by a machine learning system across the entire state that applied the algorithm to vegetation cover and disturbance type. To organize their results, the forest area of California was split into four ecoregions following the Environmental Protection Agency region lines: Northern Coast and Mountains, Southern Coast and Mountains, the Sierra Nevada, and the Central Coast and Foothills.

The overall findings of this study show that while there was an initial slight gain of tree cover (+2.3%) during the first decade from 1985 to 1999, presumably as a result of recovery from heavy harvesting that occurred before 1985, tree cover loss from 1999 to 2021 (–8.9%) considerably overshadowed this increase. This data indicates that the rate at which climate change is changing California forests has come to a point where forests are unable to naturally recover from disturbance before further disruption occurs. Rising temperatures and increasing intensity of disturbances are altering the tree cover of California forests, directly inhibiting their ability to act as natural climate solutions such as carbon storage.

The results also highlight key problems in California’s reliance on carbon offsets projects, where Improved Forest Management programs set aside about 2-4% of their carbon stock value to act as a buffer in case fire wipes out their carbon stocks. As fires continue to worsen across California, these buffer pools may not be enough to cover any potential losses. “California is putting a lot of money into these Improved Forest Management projects, and we are worried that a lot of those projects will go up in smoke,” said Dr. Wang.

The research also showed a mostly constant increase of shrub and herbaceous land cover over the study period, as post-disturbance forest land naturally transitions to this vegetation type as land recovers from disturbance. However, the researchers noted that as climate conditions continue to worsen and California becomes hotter and drier, the land may not return to forest land as it should. Instead, these shrub lands may become more permanent state-wide with forest cover diminishing greatly.

In order for forests to continue their roles in providing crucial ecosystem services like sequestering carbon and mitigating climate change, it is important to understand exactly what factors are driving change in forests over time. The researchers hope that this study will act as a useful source of information for land managers in their management projects. The study also shows potential for new remote sensing and machine learning technologies to support management efforts.

“The forests in California cannot keep up. The fires are getting worse, and the ability for the state’s land to recover from it is really threatened. We need to understand that these trees are vulnerable, they’re increasingly threatened by climate change and we should rely more on reducing emissions to mitigate the climate crisis rather than buying our way out of it through carbon offset projects.” said Dr. Wang.

Congrats to @shane_coffield @wangathan @RandersonJim and many other CECS researchers on their new paper on CA forest carbon offsets!🌲

New paper! How can we use remote sensing to build confidence in forest carbon offsets? We developed a framework to systematically assess whether improved forest management (IFM) projects in California are actually leading to additional carbon sequestration https://onlinelibrary.wiley.com/doi/full/10.1111/gcb.16380